For a comprehensive list of Continuing Education Credits and Courses by state see PDHNow.com - courses and discounts available here 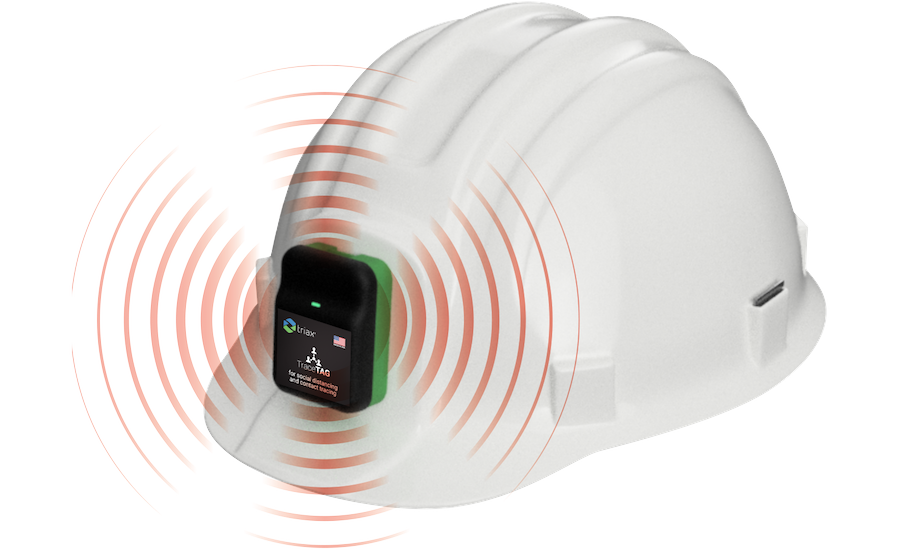 The Proximity Trace wearable tag from Triax Technologies is custom-designed to promote social distancing and provide contact-tracing information for jobsites operating during the pandemic.

Keeping essential construction projects moving during a pandemic is requiring a complete rethinking of jobsite culture and processes, and in some cases new technologies are emerging to help. Jason Pelkey, senior vice president and chief information officer at Gilbane Building Co., has deployed a new wearable IoT (Internet of Things) tag to remind workers to maintain social distancing during the pandemic.

“We’ve got it deployed on one job already, and it’s going to be beneficial for projects that are starting back up,” he says. “Right now it’s one more tool in the tool chest.”

The Proximity Trace wearable tag made by Triax Technologies is a variation on the company’s Spot-r safety monitoring tag that had already been used on an ad-hoc basis for monitoring monitoring social distancing on jobsites. But Pelkey wanted something more purpose-built to deal with operating jobsites under the threat of COVID-19.

“I reached out to them and I found that they were on the same page I was,” says Pelkey. “I think there’s a use case for IoT to work for social distancing, since it’s all about knowing where people are."

Triax Technologies existing Spot-r tag can detect when workers experience a sudden fall and also locate them on a jobsite within predefined zones. For the new social-distancing tag, the Proximity Trace fits onto a standard hardhat with a 3D-printed mounting clip, and unlike the Spot-r does not need mesh network base stations set up at the site. The tag beeps when it detects another tag nearby, and internally logs all other tags it encounters, reporting them to a web-based portal when it syncs with a unit at the site's entrance gate. The audible alarm can be deactivated for a preset period with a button press for specific tasks that require multiple workers to be close together. Developed and manufactured in less than a month in response to the COVID-19 pandemic, Triax has already begun shipping the tags out to customers.

“It has some of the same internal components but it’s an entirely new product,” says Robert Costantini, CEO of Triax Technologies. “No location data is being collected, what it collects is interactions. We’re looking to balance the privacy needs of workers while helping them get back to work.”

Pelkey has already deployed the Proximity Trace on a hospital jobsite in New Jersey that was deemed to be essential construction. “That job currently has 120 people working on it, which is a fraction of the size it was prior to this,” he says. Pelkey plans to roll them out to other Gilbane sites across the country. “We have six other jobs already in queue to deploy these on, we think it will help them with their crews,” he says.

In addition to reminding the wearers that they may be standing too close, the tags also provide invaluable data for contact tracing if someone on the jobsite tests positive for COVID-19. “The contact tracing is an important aspect for us: the faster you can track, the better. It provides us with that information much faster than checking daily work logs and making educated guesses,” says Pelkey.

But a few beeping tags alone won’t solve the broader problem of running construction sites while an infectious disease is running rampant. Pelkey says it will take more than a few clever technology products to stay ahead of the COVID-19 virus. “The stuff we’re doing now—temperature checks for workers, smaller crew sizes, distributing work through multiple shifts, separating out the work schedule—those are all going to become normal things now.”

Pelkey says Gilbane is considering how they can adjust their scheduling going forward to avoid having very large crew sizes all packed into the same area. “Owners are asking us, subcontractors are asking us, ‘what are you going to do to keep the jobsite safe?’”

It won’t just be a matter of dictating new approaches, but uprooting a lot of current jobsite culture, he adds. “Our safety team is spending a lot of time doing that, breaking bad habits and trying to change the culture,” he says. “They have to explain to people that the way you were working before was fine, but now it all has to happen 6 ft apart.”

Pelkey hopes other construction technology makers will step up with new ideas, but he stresses that general contractors and other project stakeholders need to step up and re-evaluate their own practices. “Things like how do we better structure work packets, crew assignments, and scheduling—we don’t have a ready-made solution for that,” he says.

Scheduling software can help with that workload, but having to redo everything to meet social distancing often falls to some low-tech solutions. “I’ve pushed a few [software] vendors on this but no takers so far. The way these new [crew assignments] are managed today require a superintendent to sit down and say ‘OK this crew is here’ with a greaseboard,” says Pelkey.

Going forward, Pelkey says the industry is going to have to distinguish between the sort of short-term triage being done to work through projects already underway and the new business practices that may be needed for projects yet to start. “For the jobs already going because they are essential jobs, the teams there are down in the trenches and don’t have time to thing about these big ideas. What we need to do is start thinking about what we are going to do in the future.”