US oil prices crashed as much as 27% to a four-year low of $30 a barrel as traders brace for Saudi Arabia to flood the market with crude in a bid to recapture market share.
Crude was recently trading down 22% to $32 a barrel. Brent crude, the global benchmark, also plunged 22% to $35 a barrel. Both oil contracts are on track for their worst day since 1991, according to Refinitiv.
The turmoil comes after the implosion of the oil alliance between OPEC and Russia on Friday. 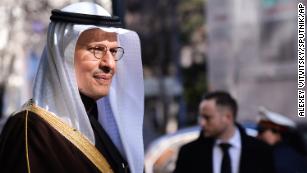 Oil just had its worst day in 11 years as OPEC and Russia fall out over the coronavirus crisis
Russia refused to go along with OPEC's efforts to rescue the coronavirus-battered oil market by cutting production. The failure of the Vienna meeting left the oil industry shell-shocked, sparking a 10% plunge in oil prices Friday. Oil prices were already stuck in a bear market because of the coronavirus outbreak that has caused demand for crude to fall sharply.
But then Saudi Arabia escalated the situation further over the weekend. The kingdom slashed its April official selling prices by $6 to $8, according to analysts, in a bid to retake market share and heap pressure on Russia.
"The signal is Saudi Arabia is looking to open the spigots and fight for market share," said Matt Smith, director of commodity research at ClipperData. "Saudi is rolling up its sleeves for a price war."
The biggest one-day percentage drop for US oil prices this century occurred in September 2001 when they plunged 15%, according to Refinitiv statistics that go back to 2000.
Analysts said that Russia's refusal to cut production amounted to a slap to US shale oil producers, many of which need higher oil prices to survive.
"Russia has been dropping hints that the real target is the US shale oil producers, because it is fed up with cutting output and just leaving them with space," analysts at energy consulting firm FGE wrote in a note to clients Sunday. "Such an attack may be doomed to failure unless prices remain low for a long time."
The 2014-2016 oil crash caused dozens of oil and gas companies to file for bankruptcy and hundreds of thousands of layoffs. However, the US shale industry emerged from that period stronger and the United States would eventually become the world's leading oil producer.
"The perils of playing a game of brinksmanship with Vladimir Putin were proven in dramatic fashion," Helima Croft, head of global commodity strategy at RBC Capital Markets, wrote in a Friday note to clients. "It is hard to see how the relationship can easily be put back on a solid footing."
The impact to Professional Engineers in the oil and gas industry may be severe, but it will be short-lived.  Adapt and overcome.  Use this period of slow down in activity and spending to optimize processes and come out the other side stronger.
Please contact us at PDHNow and Engineer Educators with any questions regarding your PE license renewal.